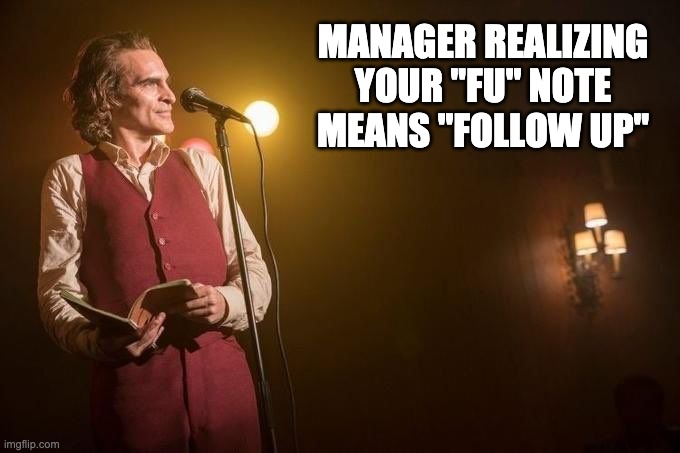 Who taught you how to take notes?

It sounds like a goofy question; but note-taking can be one of the more tedious tasks we all deal with on a daily basis. Even though we have been practicing for decades.

While it is such a basic and primary function, everyone seems to do it differently. Some of us like to show off the memory flex by not writing a thing down. Others like to write full novels during every conversation.

We wanted to spice up your group chats and add some humor. Everyone can relate to Memes/GIFs around taking notes.

Therefore, we have compiled some of the best you will find anywhere on the internet:

1. Talk about a double take

2. Me realizing I didn't save my notes before closing the tab

3. My notes are on paper, Google Docs, sticky notes, Reminders...

4. Trying to read someone else's notes

5. Tough choice when starting a meeting

6. Manager: "Did you update it in Salesforce?"

7. Me as an over note-taker

8. Me as a short-hand note-taker

10. Decisions. To review or not to review...that is the question.

11. Trying to take notes and listen at the same time

14. Looking for that one specific note out of the "novel" you wrote

15. We know the pain of taking notes...so we fixed it with Pickle Augmented Notes

Why are notes are frustrating enough to have so many memes?

So there you have it, the top note-taking image or GIF you will find on this crazy internet. Feel free to share with your work buddies.

Pen and paper have always been the tried and true hallmark of retaining information in a meeting. The same methods we learned in school around taking notes have been around since 1950 and earlier.

It's mind-boggling to think that in a world where entire industries and cultures innovate seemingly overnight. Yet we still have not found a way to augment and improve such a vital function of communication.

Maybe it's because the old methods are perfect, but that's hard to believe.

Time to blow up the old ways of taking notes

It's no excuse to say we have grown accustomed to taking notes the same way we always have since childhood. We would be hard-pressed to get anything done if we used that mantra on any other habit we started in back then.

It's time to blow up the old methods and level up with the latest technology that will take us into the future.

I know, I know...the other "A.I." (artificial intelligence) has been quite the buzzword to use in recent years. But there are some key differences between artificial and augmented.

Artificial: a machine taking the call and notes for you. Sounds great in theory, but that's the job-taking part you were worried about before.

Augmented: a machine pulling out the right information and letting you decide what to do with it. Freeing up your "mental RAM" to pay attention to the conversation while handing you everything you need to take action on after.

Augmented intelligence is the new way of the future and Pickle is employing it to make your conversations even more productive.