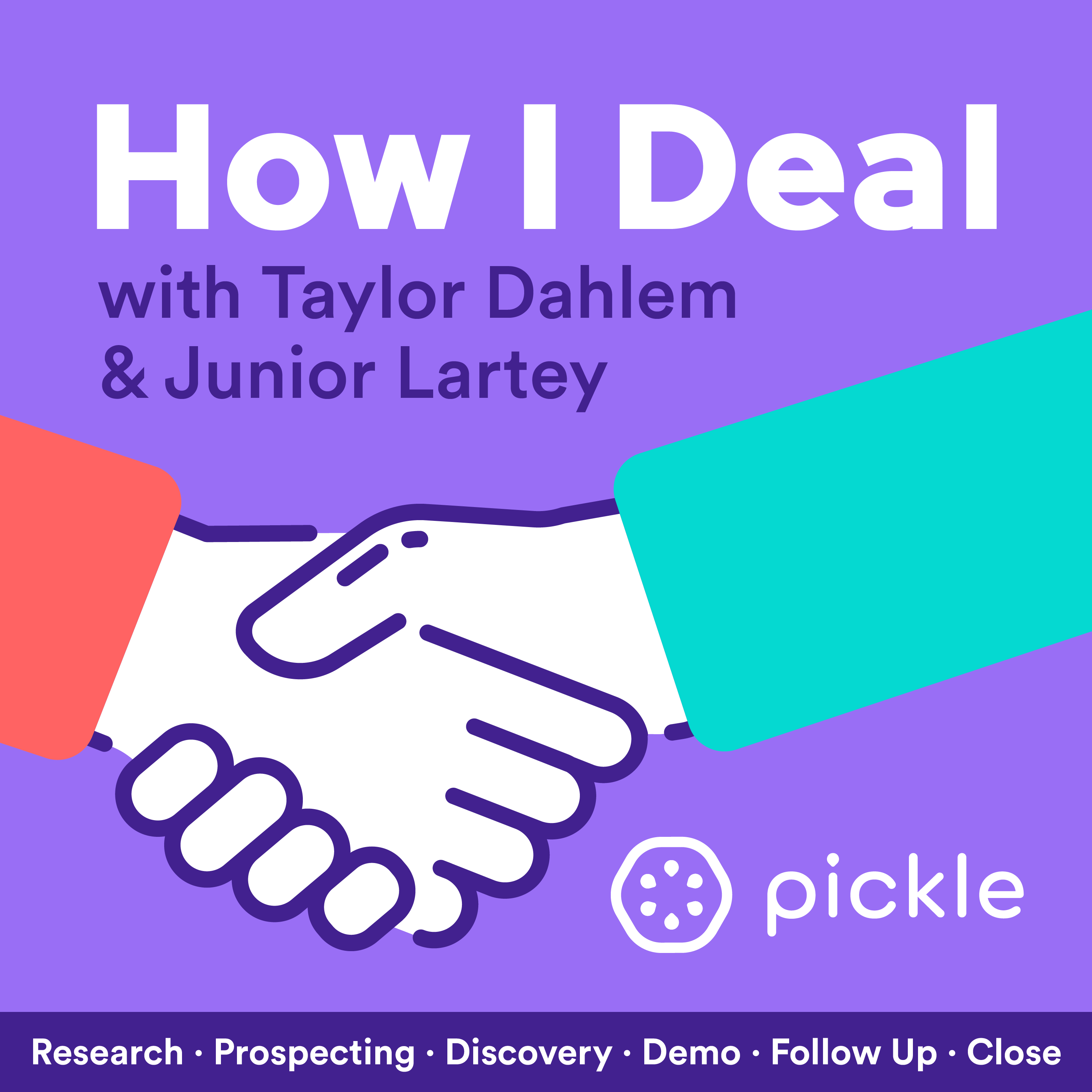 🥷 Boosting a Deal in Transit

Junior Lartey dives into a deal he won after showing up when the buyer was in VERY late stages with his biggest competitor.

From initial LinkedIn research to the signed PDF, he talks through how he won them over while providing tips you can try today!

Junior Lartey is a Senior Account Executive @ Pickle. He cut his teeth in the sales game through the door-to-door route. Not a path for everyone; but if you can build instant rapport & identify pain by boldly knocking on their door…everything else tends to come easier.

Junior then climbed the ranks in an enterprise tech company & is now helping Pickle, a conversation intelligence solution, grow as sales hire #2.

What problem does Pickle solve?

It sucks to waste hours listening back to recordings to find that deal-winning gold nugget.

A mid-market recruiting agency that operates like a sales organization.

(5:54) Junior learns that the prospect is already mid-trial with his biggest competitor. He had to sprint to catch up!

He had to “boost” this deal in transit. Meaning the prospect had already done their solution research & are evaluating competitors, but they haven’t moved forward yet.

Junior’s messaging to the 3 different decision-makers (VP of Sales, Executive Recruiter, & the head of Enablement) was relevant & timely enough to give him a shot.

Here’s how it went down:

(12:20) Want to hear a joke? Attempting to run proper discovery in 30 minutes with multiple buyers in the same room.

Junior covers how he avoided that train wreck. Running separate discovery conversations with each of the 3 buyers instead.

Which led to the ability to really dig into specific pains & what each buyer wants to achieve.

Enabling him to create a department-focused demo centered around their uncovered pains & goals.

Listen to how it unfolded:

(23:48) Having entered the competitive deal so late in the game, Junior was pushing to get to the advanced stages of discovery & demo faster.

Normally this is a typical approach considering the situation. However, he failed to recognize in discovery how burnt out the buyers had become after juggling pitches from multiple competitors.

The prospect had gotten to the point of not even wanting to move forward with any conversation intelligence tool.

Luckily he developed a strong enough relationship with the deal champion, that he got the heads up.

Tactfully changing strategies, Junior decided to slow things down with the prospect & was rewarded with ultimately winning the deal over his massive competitor.

Hear it from him:

As Mark Wahlberg did in Italian Job, you gotta boost deals in transit.

Leverage every resource you can to identify prospects actively in buying cycles with your competition. LinkedIn, G2, Amplemarket, Slack communities, etc. are all great tools to help you achieve this.

Search Set up google alerts for keywords to trigger when someone asks questions like “how does (competitor) compare to (competitor)?”

You are instantly a part of the conversation.

It’s imperative to build as many relationships as you can in a deal.

Often times the most influential people are the end-users, who don’t typically make the final decision. Most sellers overlook users & go straight for the top brass…DO NOT DO THIS.

Junior is constantly connecting with the end-users of his solution & learning what they value most. They can become internal champions at this point & do the selling for you if enough value is there.

Pickle coined this play Peer Prospecting and broke it down in detail here.

Post-discovery, pre-demo ask you champion and/or buyer if it’s cool to reach out via text.

You’ve ideally built a relationship while prospecting & after discovery, so it shouldn’t be a huge request.

Texting helps the relationship progress further & creates an environment where the buyer speaks more candidly than they would over email, a Zoom meeting, or in a formal demo.