How to Master the Hybrid Work Schedule 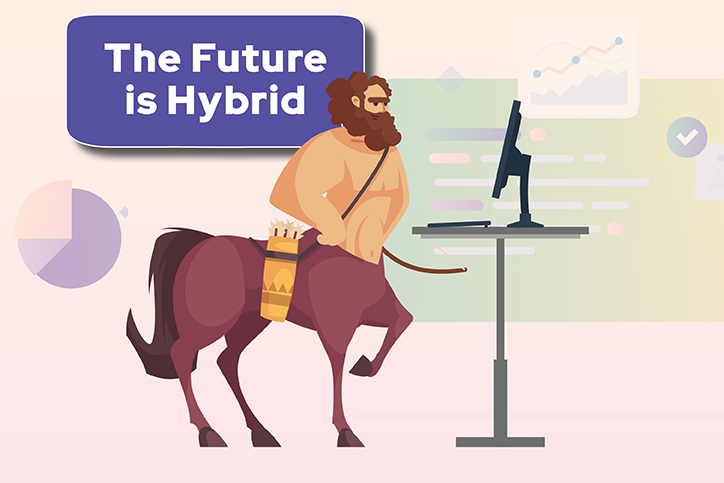 So beautiful, and for many, it's finally a reality.

If you've been awake at all for the past couple years...you know that work has changed.

In general, we believe the future of business will be hybrid: a mix of both in-person and remote work.

As of now, though, the big debate is an either-or conversation.

Out of the pandemic emerged an interesting dichotomy:

Instead of choosing, let's examine team remote vs. team office, and then talk about why combining the two could be the best of both worlds.

I've spoke with several Fortune 500 executives about their businesses.

What would you expect their greatest fears to be?

Maybe that their business would collapse?

That they would die?

That the global supply chain would break down?

Nope…an overwhelming majority of them said their biggest fear was that their newly-remote workers weren’t actually working.

However, it seems they've all been proven wrong - across the board, productivity has either increased or remained stable.

People are doing great at home, and they want to keep it that way.

65% of American workers whose jobs could be done remotely said they'd take a 5% pay cut to work from home forever.

What's more, it looks like those who are being forced back into the office are now thinking about quitting, in what's been dubbed the "Great Resignation."

95% of survey respondents said in June 2021 that they are thinking about leaving their jobs.

Companies who want to retain talent must consider the cost a Great Resignation would have on their long-term growth prospects.

It's worth considering the connection between stellar remote performance and the threat of returning to the office.

Are employees performing well because they want to prove they can?

If remote work was a permanent norm, would productivity drop?

We may never know the answer to these questions.

What we do know is that bosses believe remote work pushed productivity even lower.

Fortune 500 execs might have been "proven" wrong according to recent research, but they don't agree with the research.

In fact, nearly half of business owners say remote work is hurting productivity.

Hmm... 95% of workers are considering changing jobs, most are determined to stay remote, and 40% of bosses plan to fire workers who don't acquiesce to their office plans....

Looks like no matter what, there's going to be a lot of turnover.

Is a hybrid work schedule the solution to these problems?

Shakespeare wondered this himself ("to hybrid or not to hybrid?").

Let's look at some benefits to hybrid, consider some drawbacks, and wrap it up with some data.

Hybrid work is perhaps the most humane version of the "daily grind", with several major benefits.

Working hybrid provides a remarkable amount of freedom and autonomy.

Need to brainstorm? Plan some in-person meetings and make it happen around a whiteboard.

Need to watch the kids? Work from Chuck E. Cheese.

Need to get away? Work from the Poconos.

Need to meet with clients or coworkers? Head on over to the office.

Remote work removes commute times which returns hours of the day, while office work allows that synergy that you just can't get over Zoom.

We'll mention cross-team collaboration woes in a sec, but it's worth mentioning how great hybrid schedules are for fostering collaboration within your own team.

In general, studies show that people have enjoyed working remotely but miss the collaboration that takes place in person.

There's nothing quite like working on stuff at home, then meeting up with the team to discuss.

I'm personally not a fan of working in the same room as my coworkers in silence. I'd rather do that stuff at home.

On the other hand, I love meeting in-person, because it allows me to feel connected to my teammates. I also love going out for lunch/happy hour after work.

The fellowship dies with remote working, but the sitting at my desk in silence thing kills me a little inside.

For these reasons, hybrid is a game changer for me.

There is a preference for remote work across the board, regardless of commute time.

But, a survey from Hubble found that there is "a direct correlation between employees’ commute time and their enjoyment of working from home."

Sadly, they aren't capitalizing on the extra time, according to Harvard, spending it on unproductive work and unsatisfying leisure activities.

Still, my own intuition (and research) suggests that people would prefer to waste their own time than have it wasted for them in traffic.

A hybrid work schedule doesn't eliminate the commute - like remote work does - but it reduces it enough to feel okay about the occasional drive.

It's not all fairy dust and sunshine. The hybrid work schedule has drawbacks, and it isn't for everyone.

Hybrid schedules let you work with your team in-office, but they make it harder to collaborate with other teams.

When the same group of people go into the office at the same time as you, it's easy to get into a rut of seeing the same people.

This is one of the main drawbacks to the hybrid schedule.

A version of this happened to me at my last job. I was the only person on my team in-office, and as a result, I spent my time with a different team altogether.

I became close with this other team, and my immediate coworkers didn't feel close with me anymore.

This makes cross-functional collaboration next to impossible, because it's so much easier to just deal with those physically next to your desk.

It's one thing for everyone to be forced to use Zoom. But, when workers don't need Zoom to work with their teams (who we work with mostly, anyways), people might opt out as much as possible.

We'll know how that plays out soon enough, as hybrid becomes more common.

Until then, we'll mark it as a drawback.

In many companies, career growth depends upon factors like reputation and popularity (for better or worse).

The decreasing face-to-face interaction will at least change the nature of this dynamic.

Take a look at this excerpt from the Harvard Business Review:

"We know it’s been a while, but do you remember bumping into colleagues in the office hallway, chatting about weekend plans or a big project you’re working on?

Do you recall finding yourself in the right place at the right time, giving someone a missing piece of information or introducing a colleague to someone new?

If you’re like many people, you may not have realized how much these conversations mattered until you found yourself working from home."

This study by Microsoft reveals the importance of social capital and identifies the main victims of its recent disappearance:

What are the long-term effects of an entire generation of new hires that can't network effectively?

Google has seen a lot of criticism over their hybrid "solution", unveiled in May 2021.

Remote work for some, hybrid for others, and in-person for others can cause tension.

Hybrid work schedules are new, exciting, and previously unheard of at most companies - it's important to implement them as such.

Employees should feel connected to each other and their leadership when making a transition such as this.

Unfortunately, this is difficult to execute and inconsistent employee experience will persist as a hybrid drawback in many organizations.

Despite some challenges, employees and employers alike have recently started to agree that the benefits make hybrid work worth considering.

Hybrid has the potential to keep hundreds of thousands of workers happy (for now).

It also has the potential to keep thousands of bosses from firing their employees.

Companies like GM, Walmart, and Prudential have decided that a hybrid work schedule is the future for their salaried workers.

Is it right for you?

For the rest of this blog, we're going to assume you're a boss with the authority to make decisions about work schedules.

Whoever you are, keep reading for things to consider before going hybrid and a few hybrid schedule options.

Listen to your employees

The last thing you want is turnover as a result of your remote/office work policy.

Listen to your employees, and try to understand what they want.

Send out an anonymous survey, and talk to them one on one about their concerns and desires regarding hybrid work schedules.

Consider who can be remote

Get the full guide from Lever.

‍How to tell if a role is suited for remote work:

Roles that fall outside these areas may require further support when working remotely.

How to tell if a role is unsuited for remote work:

For a hybrid work schedule to be successful company-wide, it must be supported by an infrastructure of high-quality communication tools.

Pickle integrates with Zoom to improve productivity and note-taking.

It uses advanced machine-learning to do things like automate your follow-ups and tie your notes to the exact moment you heard it.

Making the choice to go hybrid is easy, but the transition can be difficult.

To make it a little easier, we've created a scheduling guide.